1. Because the New Mass is not an unequivocal Profession of the Catholic Faith (which the traditional Mass is), it is ambiguous and with a Protestant flavor.  Therefore since we pray as we believe, it follows that we cannot pray with the New Mass in Protestant fashion and still believe as Catholics!

2. Because the changes were not just slight ones but actually “deal with a fundamental renovation … a total change … a new creation.” (Msgr. A. Bugnini, co-author of the New Mass)

3. Because the New Mass leads us to think “that truths … can be changed or ignored without infidelity to that sacred deposit of doctrine to which the Catholic Faith is bound forever.”

4. Because the New Mass represents “a striking departure from the Catholic theology of the Mass as formulated in Session XXII of the Council of Trent” which, in fixing the “canons,” provided an “insurmountable barrier to any heresy against the integrity of the Mystery.”

5. Because the difference between the two is not simply one of mere detail or just modification of ceremony, but “all that is of perennial value finds only a minor place (in the New Mass), if it subsists at all.”

6. Because “Recent reforms have amply demonstrated that fresh changes in the liturgy could lead to nothing but complete bewilderment in the faithful who already show signs of uneasiness and lessening of Faith.”

8. Because “amongst the best of the clergy the practical result (of the New Mass) is an agonizing crisis of conscience…”

10. Because “The pastoral reasons adduced to support such a grave break with tradition … do not seem to us sufficient.”

11. Because the New Mass does not manifest Faith in the Real Presence of our Lord – the Traditional Mass manifests it unmistakably.

12. Because the New Mass confuses the REAL Presence of Christ in the Eucharist with His MYSTICAL Presence among us (proximating Protestant doctrine).

13. Because the New Mass blurs what ought to be a sharp difference between the HIERARCHIC Priesthood and the common priesthood of the people (as does Protestantism).

14. Because the New Mass favors the heretical theory that it is THE FAITH of the people and not THE WORDS OF THE PRIEST which makes Christ present in the Eucharist.

15. Because the insertion of the Lutheran :”Prayer of the Faithful” in the New Mass follows and puts forth the Protestant error that all the people are priests.

16. Because the New Mass does away with the Confiteor of the priest, makes it collective with the people, thus promoting Luther’s refusal to accept the Catholic teaching that the priest is judge, witness and intercessor with God.

17. Because the New Mass gives us to understand that the people concelebrate with the priest – which is against Catholic theology!

19. Because just as Luther did away with the Offertory – since it very clearly expressed the sacrificial, propitiatory character of the Mass – so also the inventors of the New Mass did away with it, reducing it to a simple Preparation of the Gifts.

20. Because enough Catholic theology has been removed that Protestants can, while keeping their antipathy for the True Roman Catholic Church, use the text of the New Mass without difficulty. Protestant Minister Thurian (co-consultor for the ‘New Mass’ project) said that a fruit of the New mass “will perhaps be that the non-Catholic communities will be ale to celebrate the Lord’s Supper using the same prayers as the Catholic Church.” (La Croix, 4/30/69)

21. Because the narrative manner of the Consecration in the New Mass infers that it is only a memorial and not a true sacrifice (Protestant thesis).

22. Because by grave omissions, the New Mass leads us to believe that it is only a meal (Protestant doctrine) and not a sacrifice for the remission of sins (Catholic Doctrine).

23. Because the changes such as: table instead of altar; facing people instead of tabernacle; Communion in the hand, etc., emphasize Protestant doctrines (e.g., Mass is only a meal; priest only a president of the assembly; Eucharist is NOT the Body, Blood, Soul and Divinity of Jesus Christ, but merely a piece of bread, etc.).

24. Because Protestants themselves have said “the new Catholic Eucharistic prayers have abandoned the false (sic) perspective of sacrifice offered to God.” (La Croix, 12/10/69)

25. Because we are faced with the dilemma: either we become protestantized by worshipping with the New Mass, or else we preserve our Catholic Faith by adhering faithfully to the traditional Mass, the “Mass of All Time.”

26. Because the New Mass was made in accordance with the Protestant definition of the Mass: “The Lord’s Supper or Mass is a sacred synaxis or assembly of the people of God which gathers together under the presidency of the priest to celebrate the memorial of the Lord.” (Par. 7, Intro. to the New Missal, defining the New Mass, 4/6/69)

27. Because by means of ambiguity, the New Mass pretends to please Catholics while pleasing Protestants; thus it is “double-tongued” and offensive to God who abhors any kind of hypocrisy: “Cursed be … the double-tongued for they destroy the peace of many.” (Ecclesiasticus 28:13)

28. Because beautiful, familiar Catholic hymns which have inspired people for centuries, have been thrown out and replaced with new hymns strongly Protestant in sentiment, further deepening the already distinct impression that one is no longer attending a Catholic function.

29. Because the New Mass contains ambiguities subtly favoring heresy, which is more dangerous than if it were clearly heretical since a half-heresy half resembles the Truth!

30. Because Christ has only one Spouse, the Catholic Church, and her worship service cannot also serve religions that are at enmity with her.

31. Because the New Mass follows the format of Cranmer’s heretical Anglican Mass, and the methods used to promote it follow precisely the methods of the English heretics.

32. Because Holy Mother Church canonized numerous English Martyrs who were killed because they refused to participate in a Mass such as the New Mass!

33. Because Protestants who once converted to Catholicism are scandalized to see that the New Mass is the same as the one they attended as Protestants. One of them, Julien Green, asks: “Why did we convert?”

34. Because statistics show a great decrease in conversions to Catholicism following the use of the New Mass. Conversions, which were up to 100,000 a year in the U.S., have decreased to less than 10,000! And the number of people leaving the Church far exceeds those coming in.

35. Because the Traditional Mass has forged many saints. “Innumerable saints have been fed abundantly with the proper piety towards God by it …” (Pope Paul VI, Const. Apost. Missale Romanum)

36. Because the nature of the New Mass is such as to facilitate profanations of the Holy Eucharist, which occur with a frequency unheard of with the Traditional Mass.

37. Because the New Mass, despite appearances, conveys a New Faith, not the Catholic Faith. It conveys Modernism and follows exactly the tactics of Modernism, using vague terminology in order to insinuate and advance error.

38. Because by introducing optional variations, the New Mass undermines the unity of the liturgy, with each priest liable to deviate as he fancies under the guise of creativity. Disorder inevitably results, accompanied by lack of respect and irreverence.

39. Because many good Catholic theologians, canonists and priests do not accept the New Mass, and affirm that they are unable to celebrate it in good conscience.

40. Because the New Mass has eliminated such things as: genuflections (only three remain), purification of the priests fingers in the chalice, preservation from all profane contact of priest’s fingers after Consecration, sacred altar stone and relics, three altar clothes (reduced to one), all of which “only serve to emphasize how outrageously faith in the dogma of the Real Presence is implicitly repudiated.”

41. Because the traditional Mass, enriched and matured by centuries of Sacred Tradition, was codified (not invented) by a Pope who was a saint, Pius V; whereas the New Mass was artificially fabricated by six Protestant ministers and Msgr. Annibale Bugnini suspect of being a Freemason.

43. Because the New Mass, with its ambiguity and permissiveness, exposes us to the wrath of God by facilitating the risk of invalid consecrations: “Will priests of the near future who have not received the traditional formation, and who rely on the Novus Ordo Missae with the intention of ‘doing what the Church does,’ consecrate validly? One may be allowed to doubt it!”

44. Because the abolition of the Traditional Mass recalls the prophecy of Daniel 8:12: “And he was given power against the perpetual sacrifice because of the sins of the people” and the observation of St. Alphonsus de Liguori that because the Mass is the best and most beautiful thing which exists in the Church here below, the devil has always tried by means of heretics to deprive us of it.

45. Because in places where the Traditional Mass is preserved, the Faith and fervor of the people are greater. Whereas the opposite is true where the New Mass reigns. (Report on the Mass, Diocese of Campos, Roma, Buenos Aires #69, 8/81)

46. Because along with the New Mass goes also a new catechism, a new morality, new prayers, new Code of Canon law, new calendar, — in a word, a NEW CHURCH, a complete revolution from the old. “The liturgical reform … do not be deceived, this is where the revolution begins.” (Msgr. Dwyer, Archbishop of Birmingham, spokesman of Episcopal Synod)

47. Because the intrinsic beauty of the Traditional Mass attracts souls by itself; whereas the New Mass, lacking any attractiveness of its own, has to invent novelties and entertainment in order to appeal to the people.

49. Because the New Mass attempts to transform the Catholic Church into a new, ecumenical church embracing all ideologies and all religions – right and wrong, truth and error – a goal long dreamt of by the enemies of the Catholic Church.

50. Because the New Mass, in removing the salutations and final blessing when the priest celebrates alone, shows a denial of, and disbelief in the dogma of the Communion of Saints.

51. Because the altar and tabernacle are now separated, thus marking a division between Christ in His priest-and-Sacrifice-on-the-altar, from Christ in His Real Presence in the tabernacle, “two things which of their very nature, must remain together.” (Pius XII)

53. Because the New Mass, although appearing to conform to the dispositions of Vatican Council II, in reality opposes its instructions, since the Council itself declared its desire to conserve and promote the Traditional Rite.

54. Because the Traditional Latin Mass of Pope St. Pius V has never been legally abrogated and therefore remains a true rite of the Roman Catholic Church by which the faithful may fulfill their Sunday obligation.

58. Because “In the Libera nos of the New Mass, the Blessed Virgin, the Apostles and all the Saints are no longer mentioned; her and their intercession thus no longer asked, even in time of peril.”

59. Because in none of the three new Eucharistic Prayers (of the New Mass) is there any reference … to the state of suffering of those who have died, in none the possibility of a particular Memento, thus undermining faith in the redemptive nature of the Sacrifice.

60. Because we recognize the Holy Father’s supreme authority in his universal government of Holy Mother Church, but we know that even this authority cannot impose upon us a practice which is so CLEARLY against the Faith: a Mass that is equivocal and favoring heresy and therefore disagreeable to God.

61. Because, as stated in Vatican Council I, the “Holy Spirit was not promised to the successors of Peter, that by His revelation they might make new doctrine, but that by His assistance they might inviolably keep and faithfully expound the revelation or deposit of Faith delivered through the Apostles.” (Dnz 3070)

62. Because heresy, or whatever clearly favors heresy, cannot be a matter for obedience. Obedience is at the service of Faith and not Faith at the service of obedience! In this foregoing case then, “One must obey God before men.” (Acts 5:29) 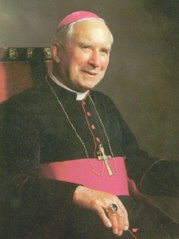