There is so much talk about God’s mercy these days and yet many people have the wrong idea about it. To put it simply, the purpose of God’s mercy is to call the sinner to repentance, that is, to have the sinner turn away from his sins, beg God’s forgiveness, and amend his life.  If the sinner refuses to repent, then he abuses God’s mercy and can consequently expect God’s punishment upon him.  Without repentance, God cannot forgive the sinner.  If the sinner persists in his sin and dies in that state (i.e., with the guilt of mortal sin), he will be condemned to hell forever.

Let us read and meditate on the words of St. Alphonsus Liguori, Doctor the Church and moral theologian par excellence, on this matter.  This meditation was taken from his book called “The Way of Salvation and of Perfection”.

“2 new books on the family by cardinals” is the headline of sspx.org. www.sspx.org/en/news-events/news/2-new-books-family-cardinals-10713

Endorsing books written by modernist Cardinals is a forbidden Index all by it self. It is these very cardinals who promote the damaging Vatican II new-religion that ultimately DESTROYS the very family they say they want to “save”. The aim, like Vatican II, is to rewrite history to remain selfish without being too selfish.

Like telling a fish to drink some water but not too much water.

Typical methodology of the modernist is it not? Say something truly traditional to assuage the consciences of the sheep then use it to promote the very opposite. It is like the arguments put forward so often these days that appeal to the subjective desire enabling one to ‘be charitable’ The ‘quietist’ mentality of lazy sheep gives permission to accept error…all in the name of ‘charity’ of course. Tepid souls use their version of ‘contemplation’ as a means to avoid action. They’ve convinced themselves that:

” man’s highest perfection consists in a sort of psychical self-annihilation and a consequent absorption of the soul into the Divine Essence even during the present life. In the state of “quietude” the mind is wholly inactive; it no longer thinks or wills on its own account, but remains passive while God acts within it. “Quietism is thus generally speaking a sort of false or exaggerated mysticism, which under the guise of the loftiest spirituality contains erroneous notions which, if consistently followed, would prove fatal to morality. It is fostered by Pantheism and similar theories, and it involves peculiar notions concerning the Divine cooperation in human acts.” Source

True Mysticism:
“Mysticism, according to its etymology, implies a relation to mystery. In philosophy, Mysticism is either a religious tendency and desire of the human soul towards an intimate union with the Divinity, or a system growing out of such a tendency and desire. As a philosophical system, Mysticism considers as the end of philosophy the direct union of the human soul with the Divinity through contemplation and love, and attempts to determine the processes and the means of realizing this end. This contemplation, according to Mysticism, is not based on a merely analogical knowledge of the Infinite, but as a direct and immediate intuition of the Infinite. According to its tendency, it may be either speculative or practical, as it limits itself to mere knowledge or traces duties for action and life; contemplative or affective, according as it emphasizes the part of intelligence or the part of the will; orthodox or heterodox, according as it agrees with or opposes the Catholic teaching. We shall give a brief historical sketch of Mysticism and its influence on philosophy, and present a criticism of it.” Source

This article was taken from the February 1916 issue of the Franciscan Herald. 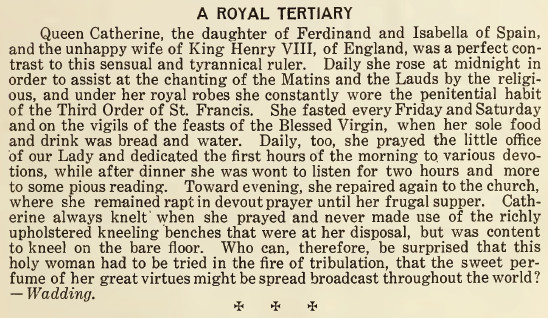 The article was taken from the February 1916 issue of the Franciscan Herald.

Father gives an excellent sermon on the need to Watch and Pray, for example, the Year of Mercy is the gesture of a fox! 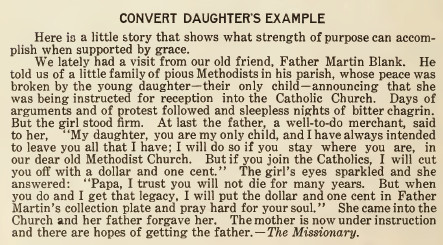 This article was taken from the December 1915 issue of the Franciscan Herald. 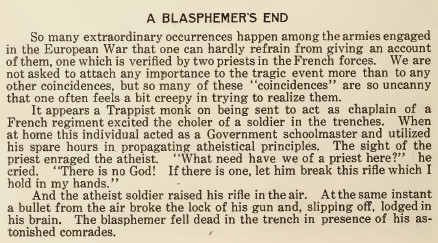 This article was taken from the October 1915 issue of the Franciscan Herald.

As we hear about the so-called Year of Mercy and about the “merciful favors” granted to the neo-SSPX by the pope (always toeing the line, of course…);

As we hear about the impending economic collapse and its aftermath;

As we hear about the fires and floods, earthquakes and volcanoes; of birds falling from the sky and fish washing up from the sea;

As we hear about Planet X, underground cities for the elite, martial law, total chaos and lawlessness, secret armies on our own soil;

As we hear about wars and rumors of wars, more and more threatening, drawing ever closer…

As Fr Hewko mentioned in his sermon of September 13th, the date of the 5th Apparition of Our Lady of Fatima:

When the angel appeared and found the children playing, he said to them: “What are you doing?! You should be praying and making sacrifices for sinners! Our Lord has chosen you to do his work…do not waste your time on frivolities!”

If an angel from Heaven speaks to three young children in this manner, what would he have to say to us? What does God expect from us? Are we doing everything we can to fight in this battle as Soldiers of Christ in the Army of Our Lady?

We must battle on…

May we make this month the most efficacious of all, uniting our minds and hearts and intentions, responding to Our Lady’s requests as never before, making good use of the time given us…

Fight! Children of the Light! You the Few who can see! (Our Lady of LaSalette)

Here is an importance reflection from The Biography of Marcel Lefebvre by Bernard Tessier de Mallerais. The paragraph is separated into sentences to help the reader to focus on the message.

However, confidence is not nonchalance.

His friend Fr. Calmel was well aware of this: “Leaving things up to the grace of God is not to do nothing! It is to do everything in our power, while continuing in love.”

Holy abandonment is found “not in resignation and laziness but at the heart of action and initiative.”

It would be dishonest to pray to God for victory without actually fighting for it.

Magnanimity asks us to give something beyond prayer that one must pay for with one’s own person: “The things I pray for,” St. Thomas More prayed magnanimously, “dear Lord, give me the grace to work for.” (p 568)

In 1634, Our Lady of Good Success appeared to Mother Mariana de Jesus Torres, a Conceptionist nun living in Quito, Ecuador. The nun was given prophecies about the future and especially about the 20th century.

In one particular vision, the sanctuary light was extinguished, leaving the main altar place completely dark. The meaning of this for our century is that there will be a great loss of Faith and the Church will be devastated. The reasons for this devastation are:

1) Modernism – the synthesis of all heresies spreads throughout the Church

2) the loss of authentic vocations to religious life

3) the spirit of impurity everywhere

4) the corruption of children’s innocence, resulting in the destruction of vocations to the priesthood as priests will be lukewarm and will be careless in performing their sacred duties

5) laxity and negligence of those who possess great wealth

With respect to point 4) above, read the shocking front-page article from the Toronto Star September 2, 2015 issue where an Ontario school board reports on how they will be corrupting the innocence of school children (https://www.thestar.com/yourtoronto/education/2015/09/02/peel-board-wont-exempt-kids-from-learning-about-gay-families-gender-issues.html).

Our Lady foretold that in the 20th century the situation in the Church and in the world will be so bad that “You would die of sorrow to see all that I have revealed to you here take place” (p 214). Then, when the situation will be at its worst, when “evil will seem triumphant … This, then, will mark the arrival of my hour, when I, in a marvellous way, will dethrone the proud and cursed Satan, trampling him under my feet and fettering him in the infernal abyss. Thus the Church and Country [Ecuador] will finally be free of his tyranny” (p 214).

Now is the time to pray and work toward the restoration of the Church: the victory will be won – may we be part of it! Let us pray that God may “quickly bring to an end those ominous times, sending to this Church the Prelate who will restore the spirit of its priests (emphasis added, p 213)”. This will bring about a full restoration of the Catholic Church and the Reign of Christ the King.

However, we are living through the devastation prior to the restoration. We must not falter. This is not the time to adopt politically correct language or to have an exaggerated human respect for people in positions of power, particularly in the clergy. We have to take the lesson of Vatican II seriously and not repeat it. This lesson demonstrates what happens when bishops cease to teach, and, when under the pretext of false obedience and exaggerated authority, the laity does not stand up for the Truth – instead Truth becomes subject to expediency and cowardice.

Listen to Fr Gregorius Hesse’s talks about Papal fallibility and you will be surprised with what candor and directness Father comments on the actions taken by various popes and the militancy Catholics used to defend their Faith. His bluntness gives courage to his audience! We must adopt a similar attitude! So, with “childlike simplicity” (p 209), we have to be direct and honest. We have to focus on spreading the Truth and working for the Kingship of Christ. We cannot have an exaggerated respect for the clergy if they are not doing their jobs – we must point out the errors as did the Catholics of old.

Contrast this with Bishop Williamson, whose duty it is as a bishop to teach and to defend Doctrine. In his EC 420 August 1, 2015 “Authority Limping”, he states: “At present I am more and more disinclined to impose even a true viewpoint on anybody, because souls are now so confused that the least imposition is liable to increase rather than decrease that confusion.” But if a bishop does not use his office to “decrease confusion“, who will?

As Catholics, it is our duty to oppose error and confusion. This should not be exercised by emotional comments made privately behind people’s backs or by specious arguments on blog postings, but rather by sober and reasoned arguments to people who are in a position to make changes.

Our Lady of Good Success, pray for us!